Lucknam Park is approached by a magnificent mile long avenue of four hundred lime and beech trees planted in 1827. The gardens of the country hotel spread over 5 acres and are set within an impressive estate of 500 acres of listed parkland.

Of all the gardens, the Walled Garden is the oldest dating back to the 1830’s. Within its walls lie a very traditional English garden with tall, sculpted Yew hedges and low box hedging framing the herbaceous borders. Dominating the garden is the Dovecote, a listed building dating from the late 18th century.

The Rose Garden was planted in spring 1996. The symmetrical design is based around that of a French courtyard with espalier fruit trees laddering the old converted stable building walls and a small formal pool in its centre. Lavender is very evident throughout including, formal circular Lavender garden on the west lawn.

The Arboretum covers a 1.5 acre site within the estate’s 500 acres of parkland and has been designed for all seasons. It was started in 1998 to celebrate the 10th anniversary of the hotel and has been filled with some 200 trees, many of them rare and unusual.

Lucknam renovated the old Vinery in 2012, a historic greenhouse. The newly built 8 large raised beds, filled with over 120 tons of top soil, now has over 30 varieties of produce, ranging from alpine strawberries, rhubarb through to runner and broad beans; from edible flowers to root and brassica crops. 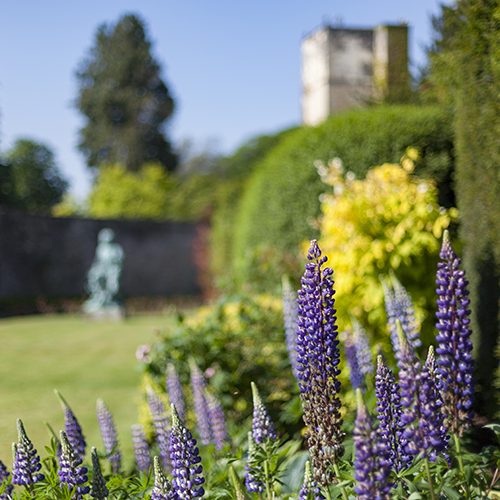 The long drive stretches up to the 18th century main house that fronts the breathtaking 500 acre estate. This secluded venue offers an ideal setting for spa breaks, weddings, or simply an indulgent weekend away.

There's plenty to explore on our 500 acre estate