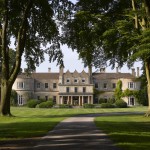 The ceremony was hosted by ITV news presenter Kylie Pentelow with an inspiring opening address by travel journalist and Chair of Family Holiday Association Alison Rice. The Ceremony took place in the brand new Landsdown Suite of Ashton Gate Stadium in Bristol.

The prestigious South West Awards celebrate the best in the South West and aim to promote and reward the top organisations in the tourism industry. This year 135 different awards were announced and a record 605 entries were considered.

Alison Rice was also this year’s Chair of Judges and commented: “Yet again the South West leads the way in tourism excellence. Whatever 2017 throws at this very special region of Britain, tonight’s award winners will excel at what they do best – offering all comers the best possible visitor experiences.”

Claire Randall, Managing Director at Lucknam Park Hotel & Spa, was thrilled to be there to pick up the awards.

Claire said: “I am both pleased and delighted to have won these three awards. It was especially gratifying to win gold in hotel of the year for the second year running and it is a great reflection of the very hard work the team put in to deliver the best service across all areas of the business.”

Just six miles outside Bath and set in 500 acres of parkland, Lucknam Park is a former Palladian mansion, now a 5* hotel, recently dubbed ‘Britain’s finest country house hotel’ by the Telegraph. It has a Michelin-starred restaurant under Hywel Jones, as well as a less formal Brasserie, and also boasts a formidable cookery school, a world-class Spa and a renowned equestrian centre. Lucknam Park (01225 742 777, lucknampark.co.uk).

For further information on Lucknam Park, please contact Jenny Martinez or Chloe Wallace at Ann Scott Associates on 020 7823 9988 or jenny@annscott.co.uk or chloe@annscott.co.uk