Hywel Jones is Executive Chef for Michelin-starred Restaurant Hywel Jones by Lucknam Park and The Brasserie. Since his appointment in 2004, Hywel has successfully raised the standards of the cuisine to a level that has resulted in numerous accolades including a Michelin Star.

Hywel started his career with David Nichols at The Royal Garden and then moved on to work as Chef de Partie in two Michelin 3-star establishments; Chez Nico at 90 and Marco Pierre White. He then furthered his skills as junior Sous Chef at Michelin starred Le Souffle. From there he went onto earn his first Michelin Star at Foliage restaurant at Mandarin Oriental Hyde Park where he was Head Chef for five years. Prior to his move to Lucknam Park Hotel and Spa, he was executive Chef at Pharmacy Restaurant in Notting Hill.

What inspired you to work in hospitality

I was fortunate that from an early age my Parents made a great effort to take us to nice hotels and restaurants and I became interested in food and cooking from this. I also realised from an early age that I did not have the physique to make it as a pro rugby player so cooking was the next best thing.

Have you seen the place?.

When not at LPH, how do you spend your time

With my wife and 2 sons.

Unusual fact about yourself

I was a month away from joining the Royal Navy having passed my entrance exams something I still occasionally regret not doing. 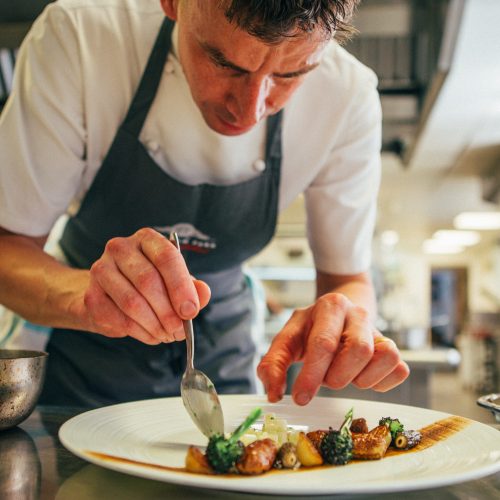